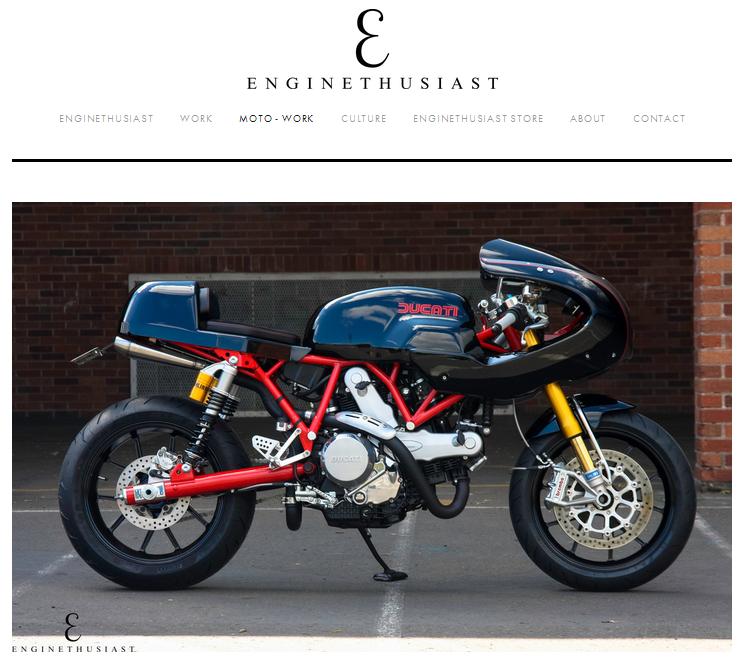 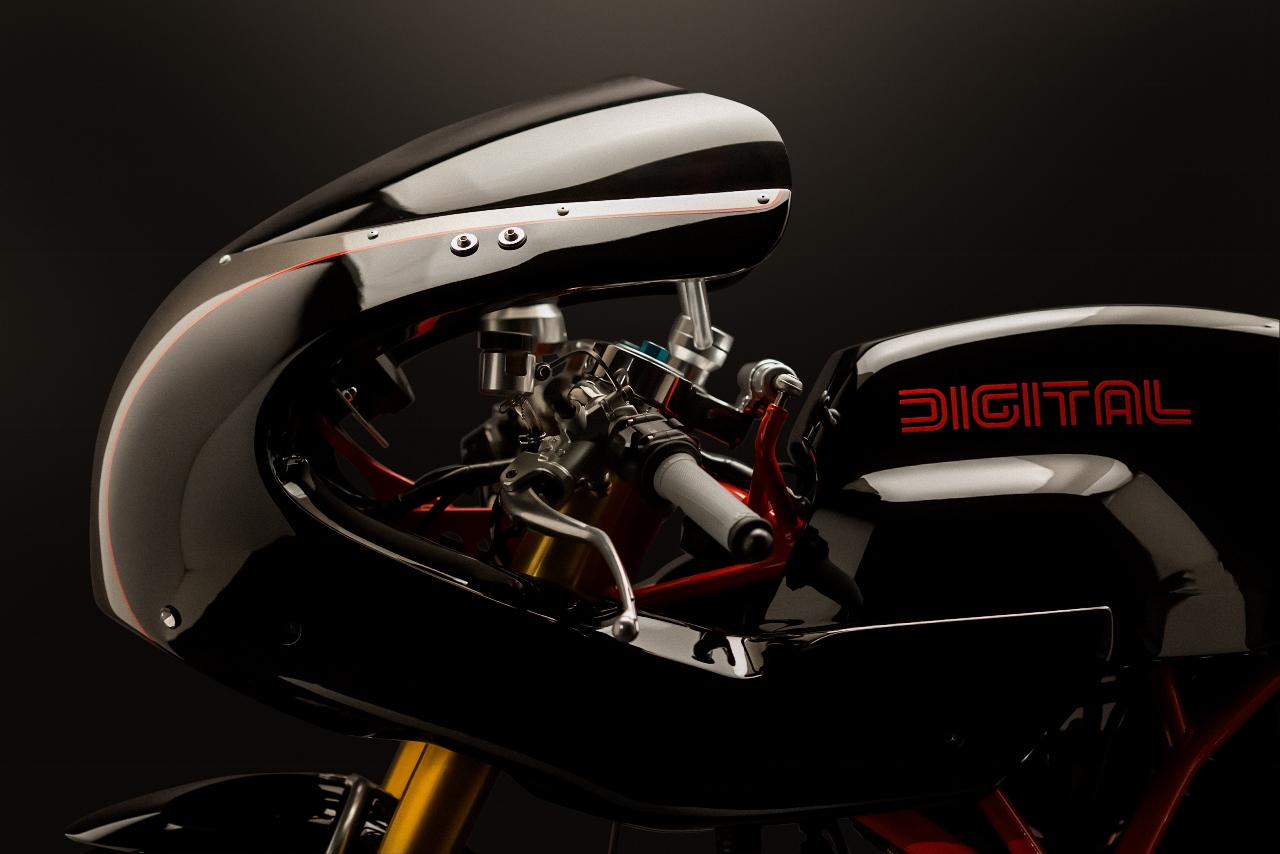 Most people are familiar with the Ducati Sport Classic line designed by Pierre Terblanche, but they may not realize that the inspiration for these icon motorcycles was one of his earlier projects, the MH900E Mike Hailwood tribute. This was a limited edition hand-built bike that was carefully assembled in a separate corner of the Ducati factory. It featured one-off details and a fit and finish that was not available in the rest of the regular mass-produced models. My vision for the Bella project shares that ideal. I imagined what the Sport Classic would look like if it was produced today with high-tech changes, modern improvements, and upgrades that spared no expense. It would be given the same attention to detail and hand-built treatment as the MH900E while being indistinguishable from a bike coming from the Bologna factory. I wanted only the educated and discerning eye to be able to truly appreciate the countless subtle changes that went into building this original machine. For this reason, almost every part and feature that went into the bike was adapted from other modern, high performance Ducatis or the MH900E itself. At the same time it had to be classy and timeless; no billet parts or carbon fiber. From the featherweight 999R forged Marchisini wheels wrapped in sticky Pirelli rubber, to the Ohlins Superbike front end with Brembo brakes, everything there belongs on a Ducati.

Many builders like to take pride in doing everything themselves, but at the expense of the final product. I’m not one of those guys. Everything has to be perfect and if someone is an expert at what they do, I’m not afraid to involve them in the project. That’s why I recruited some of the best in the business to help me out. Chris from Masic Industries was enlisted to refinish every nut and bolt back to factory new condition and the only one I trust to coat the mildly-modified frame and wheels. Also done there was the mirror-like polishing of every aluminum part including the engine covers. All seams and casting marks were removed before many of the parts received a brushed finish; a feature also taken from the unique MH. Jeff Johnson of Ill Eagle Designs hand-formed the one piece aluminum solo tail section that mounts using the stock seat latch for easy removal. He also adapted the Monster 1100 headers into an amazing underseat exhaust capped by Cone Engineering cans. Ginger from New Church Moto was the only choice to make the sexy hand-stitched suede seat and matching pad. Tying it all together is the bottomless black and charcoal paint laid down by Tony’s Customs.

Of course, no Digital Directiv build would be complete without some high-tech wizardry and Bella is no different. It starts with full LED lighting all around, including hidden indirect brake, tail, and turnsignals in the rear. Ignition is no longer controlled by a key. An iPhone compatible Bluetooth Smart system takes care of telling the bike when you approach and when you leave; turning on and off the bike as needed while your phone remains in your pocket. Last but certainly not least is a feat that has never been accomplished. A modern digital dash unit from a 1098 has been integrated into the Sport Classic electrical system using a custom made wiring harness and ECU firmware. While this may sound simple, this one feature took over 100 hours of R&D on both hardware and software. Even though an aftermarket dash could have been mounted with much less time and effort, it would have taken away from the factory feel that was a requirement of the Bella project.

All of this adds up to a unique and functional work of art that blurs the lines between custom and factory but gives the best of both worlds; a truly bespoke motorcycle that begs to be ridden.

We’re up on Bike Exif again!

Our XR650L named Toro made onto Bike Exif today. Click through to check out the details. 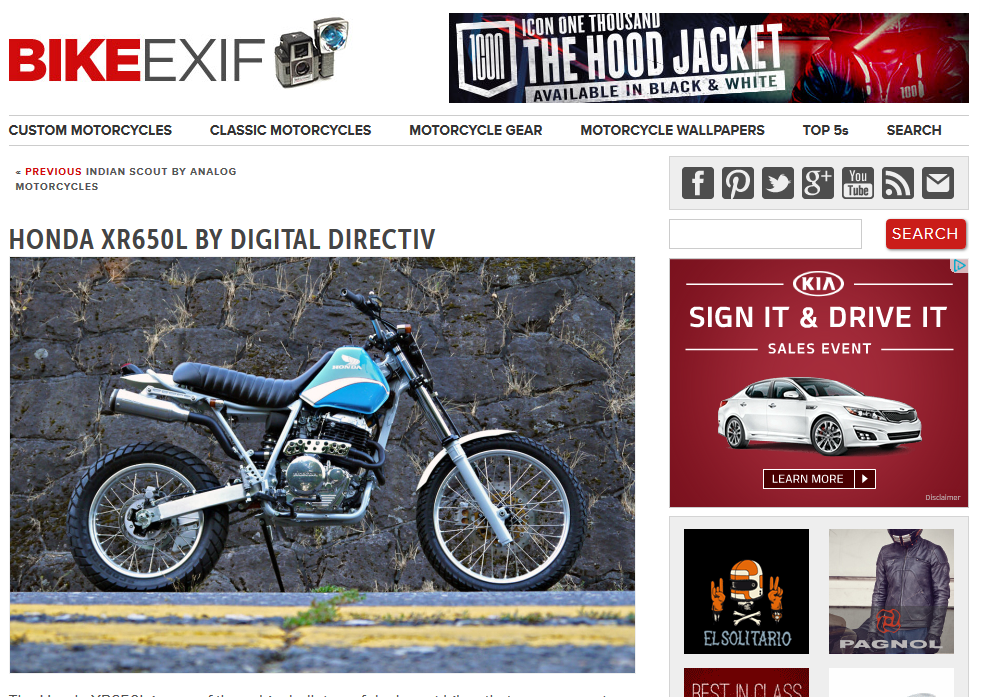 A long time ago I started working on a bike project and doing some how-to videos that followed the build process.  As often happens with these kinds of things, I found myself too busy to keep the project going and the video production stopped.  Today I’m happy to announce that after four long years, my video project Resurrected Metal has been resurrected.  This is just a quick catching up video explaining where I’ve been and where the videos will take us in the future.  Give it a view and check back for more motorcycle repair, maintenance, and customizing videos in the coming weeks.

Welcome to our new site!

Hello and welcome to the new online home of Digital Directiv!

While we’re busy doing all sorts of electrical updates to other people’s bikes, we’re also working on some of our own unique creations.  Check back with us for updates on our current projects and keep a lookout for our how-to articles and bike tutorials.

Let us know if there are bike questions we can answer for you or topics you would like to see covered in our tutorials.   We love to share what we know and help out the motorcycle community.